Summary Special credit for helping critiquing and helping me put this together: Brian Childers, dreth and Kiriyha I would like to propose to take the rETH that is sitting in the treasury and to earn yield on it. As of December 24, 2021, the DAO...

Special credit for helping critiquing and helping me put this together: Brian Childers, dreth and Kiriyha

I would like to propose to take the rETH that is sitting in the treasury and to earn yield on it. As of December 24, 2021, the DAO treasury has ~127 rETH2 tokens.

This idea is to utilize the StakeWise compound feature to swap rETH2 for sETH2. This is an effortless way to help the treasury grow and to help secure the Ethereum network.

I did some back of the napkin calculations (tab Idea 1) and in 5 years the DAO treasury could earn ~35 rETH2. Assumptions being made in the calculations:

The several benefits of this proposal:

Need help from someone on how this would done, technically

Idea 2 (DAO to Become an LPer)

This idea will take half of the rETH2 (63.5), convert it into sETH2 (63.5) and then the DAO would provide liquidity to the rETH2/sETH2 pool. This would provide a greater APR for the treasury and it would help add the sETH2 back into the liquidity pool that we took out AND we will be removing less sETH2 from the pool, so this could be more attractive to rETH2/sETH2 LPers.

The 5-year return on this (again with end of year compounding) is 145 ETH (I converted the SWISE that would be earned from liquidity mining into ETH for simplicity). You can check out the math on tab Idea 2 from the Google Sheets link I posted above.

The several benefits of this proposal:

Need help from someone on how this would done, technically

The range would be optimized to receive maximum rewards. We also have the pool receive no SWISE rewards to not compete with other pools, but this would put the DAO’s pool at risk of impermanent loss.

Another possibility is to take the rETH2 and turn it into ETH and look for a DAO or another platform to invest in. I like this idea, but I think it is too early for the DAO to go and venture outside of StakeWise. I think we still have a duty (and a lot to gain!) from continuing to contribute to the StakeWise protocol.

I am in favor of Idea 1, even though Idea 2 provides more return. Idea 1 is a simple first step to get the DAO to start generating yield on its rETH2. Regardless of whether Idea 1 or 2 gets picked, we would need to start with a proposal to start swapping 10-20 rETH2 for sETH2 every month until we hit the desired x sETH2 that will be determined in a poll (one proposal would need to get passed per month).

This is the way this would work.

Thank you all for reading this proposal. I would appreciate input from as many $SWISE holders as possible, so please do not hesitate to share any of your thoughts. There are different variables to consider (e.g.with regards to implementation and the alternative usage of the Treasury), and we invite every one of you to share your thoughts below.

If you can help share concerns, thoughts, (corrections in my calculations) and the idea that (if any at all) that you would prefer to see implemented. Thank you!

Which idea are you in favor of? (Please don’t vote for the title)

What % of DAO Treasury do you want to Stake? (If Idea 1 were selected) (Please don’t vote for the title)

What % of DAO Treasury do you want to Stake? (If Idea 2 were selected) (Please don’t vote for the title)

Should the pool receive SWISE rewards? (Please don’t vote for the title)

Good discussion to start! From what you propose I would lean towards option 2, as that supports the ecosystem best. In that case I would also say that the treasury does not gain Swise rewards for LPing (which I think should only go to users) and takes a position most supportive for rETH2 over several ticks, so as to create a buffer of sETH2.

However the fee in that pool is very low and without Swise rewards it’s a less rewarding investment, so the only gain is really the part that gets staked (sETH2). Which makes you question if it is worth all the effort.

1- put 127 rETH2 and 127 sETH2 (from treasury) into the rETH2/sETH2 pool, to make the token more liquid as a service to the platform. I also don’t think the DAO should be rewarded SWISE but if they were, that’s ok. However, this will dilute the trading fee and SWISE rewards of the current LPers.

2- Do nothing and wait for withdrawals to be enabled in ETH 2.0. Then, it can actually compound its ETH.

Hi @183amir , just to clarify, the treasury doesn’t have any sETH2. The treasury would need to obtain the sETH2 for the pool by swapping for it with the rETH2 it holds.

I voted for investing elsewhere. Idea 1, simple staking, has a low enough return that I’m not convinced it’s worthwhile, while Idea 2, staking and LPing, would be taking potential yields away from users, making the DAO richer but less appealing to newcomers.

My preference would be to keep the DAO’s assets liquid for whatever needs arrive, whether that’s salaries, marketing, or other unplanned expenses. I don’t think Idea 1 hurts (might as well make some return, even if < 5%), but it doesn’t seem particularly urgent.

The idea of LP’ing seems positive EV while still providing a service to the ecosystem of users.

One modification on this idea is to use curve for our liquidity pool and to incentivize it via convex finance. This would have the added benefit of attracting much more ETH to the protocol for minimal token emissions.

The treasury would earn:

Frax finance basically used this playbook to grow their TVL from $200M to nearly $1.8B since this summer while emitting very little frax shares tokens in the process.

I’d be happy to explain more about the curve ecosystem if anyone here isn’t as familiar.

I voted for idea 1, even though I actually like idea 2 better. But there is this one risk that I think we should not and must not take:

Public opinion of the protocol is of utmost importance. This could actually do damage. So, idea 1 it is. And I love the initiative, @bZ1 - well done!

First of all, thank you @bZ1 for ideating here - I believe our Treasury is getting to a size where active management becomes a necessity. I voted for “just stake”, because the Treasury can indeed be deployed for further yield opportunities, but not for SWISE farming, which would deplete the rewards for everyone else. Without the farming rewards, I believe liquidity provision is not as interesting, but could be considered still.

From my perspective, the reason for the liquidity pool for rETH2/sETH2 (and the high APR there) is to use it for swaps, and LPs there are 1) aware of the risk of converting sETH2 into rETH2, and 2) sufficiently (it seems) rewarded for taking that risk. It means that nothing should stop the DAO from utilizing its own liquidity pool for the swap of rewards into principal.

One consideration is whether in doing so, it would risk depleting sETH2 liquidity, which could indeed hurt the protocol. I voted for staking half of the Treasury, ie 63.5 rETH2, because in my opinion, it wouldn’t deplete the pool too much. There is 820 sETH2 sitting there still, and converting 63.5 rETH2 into sETH2 would decrease the amount of available liquidity by just 8%. Therefore, I believe staking half the Treasury without hurting the liquidity pool is manageable.

Finally, if this is the wrong call, and at some point liquidity becomes a concern, nothing stops the Treasury from swapping back to rETH2 to support the protocol.

In light of the flexibility we could have here, and the way figures stack up, I’m in favour of staking 63.5 rETH2 from the Treasury.

Hmm, I think rETH2 from treasure should be used to reward SWISE holders / stakers. I thought that was the plan

Out of the 3 ideas I think it would make more sense to go with option 3 and seek for an investment which provides a higher return, I really like the idea @foghog suggested about looking into curve and taking part at the curve wars using some SWISE which will not only provide revenue but will also increase liquidity and visibility to the protocol which is something I feel we need urgently.

I also suggest to anyway leave some liquidity that can be easily accessible in case some costs need to be covered so I would not invest 100% maybe just 50%.

I really like this proposal, I think it’s great, I’ve casted my votes as well. When it comes to addding liquidity, it is possible to consider adding very one sided liquidity, which would have 2 effects:

Other than this minor idea/proposition, I’m in full support of this proposal. My only concern would be knowing the opinion of rETH2/sETH2 LPs on this, which would be the most affected ones.

Sorry I never got around to publicly responding to this question. According to the earlier proposals, the plan is to distribute rETH2 only to those SWISE tokens that are already in circulation, ie SWISE in the Treasury wouldn’t be receiving any rETH2. Hope this helps

I think @dreth’s idea of one-sided pooling resolves my biggest concern about the DAO diluting farm rewards for liquidity providers. I’d say do it!

hey G would you mind elaborating on the one-sided pooling? like which range would we choose for example?

This range is quite wide, but it’s an example of what could be used: 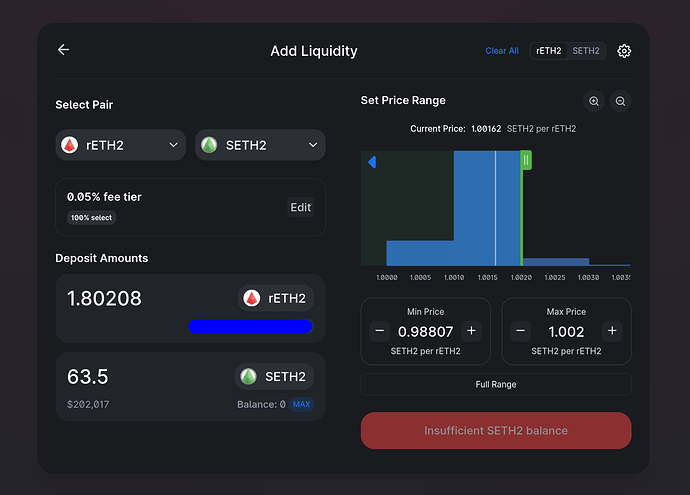 This range would basically make SWISE rewards a whole lot smaller and would effectively provide the entire 63.5 sETH2 portion taken from the pool at the disposal of traders. The position is ~13-14 ticks to the left and one tick to the right, 0.98807-1.002. This uses the maximum amount of sETH2 possible, while providing very little rETH2 to the pool.

I’m not sure how much this would reduce SWISE APR exactly, but I know it’s significant because I pooled like this on the sETH2/ETH pool for a while to avoid loss of principal (since I staked early) and to maximize staking rewards even if SWISE rewards were lower.

Using this position though, the DAO would feel the change in proportions of rETH2 and sETH2 as other liquidity providers whenever a trade happens, but would retain the maximum possible amount of sETH2.

Just to make sure I understand - is the idea here to:

I see this would allow the protocol to earn staking rewards on the unutilized amount of sETH2, not steal the farming rewards from the community, and still keep sETH2 liquidity accessible to our stakers. If this is what you have been thinking, it hits on all points G. Awesome work!

@dreth - This sounds like an excellent idea to me as well.

I dig it. Whoops I need 20 characters.

Yes! correct. I think it’s the most practical way to do it \o/